How Puget Sound Shaped My Life and My Stories 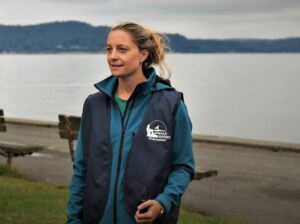 Join us on Saturday, June 12th to hear from Founder and Director of Whale Scout, Whitney Neugebauer!

Endangered killer whales captivate the hearts of followers around the world. Their intimate social bonds, stories, and charismatic behaviors connect and draw us into their world. The fragile population status of Southern Resident killer whales has gained much attention over the years however many solutions are often simpler than we might think. Learn how planting trees around the Salish Sea will help save the orcas and the critical salmon populations that sustain all of us.

Whitney Neugebauer is the Founder and Director of Whale Scout, a nonprofit organization based in Bothell, Washington. She received her master's degree in Marine and Environmental Affairs at the University of Washington. She also serves on the Bothell Parks Board, the board of Heartwood Nature Programs, and Friends of North Creek Forest.
Whitney's Dock Talk is prerecorded and will be posted on the Dock Talks webpage, YouTube Channel and social media pages at 4pm PDT on Saturday June 12th.
➡️Learn more about Whitney and her Dock Talk at https://www.soundexp.org/docktalks
➡️ Get involved and learn more about Whale Scout at https://www.whalescout.org/
➡️Explore more Orca Action Month events and activities at https://www.orcamonth.com/
Sound Experience YouTube Channel
Map Sound Experience YouTube Channel