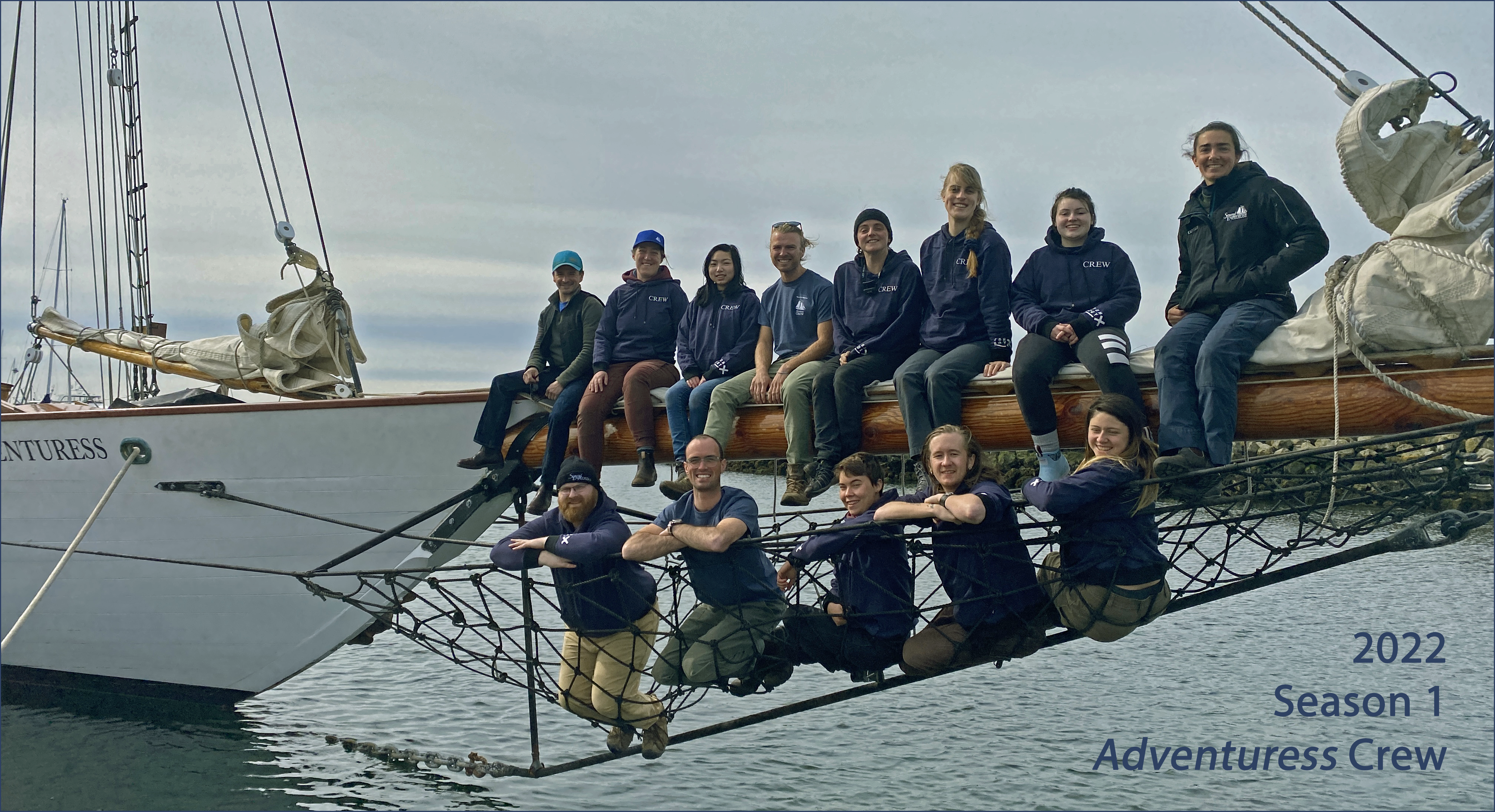 Gaia Wilson – Chief Mate
Gaia began her maritime career 8 years ago aboard Adventuress and has been working at sea ever since. She has sailed with an array of tall ships on both coasts of the United States, through Europe and across the Atlantic. She is drawn back to Adventuress season after season by the incredible community and the opportunity to facilitate the same life changing experience she had that first year for new students and crew.

Evyn Lewis Ford – Program Coordinator
Evyn has been fascinated by the world of marine science for as long as they can remember. After seeing the Adventuress for the first time as a docent onboard the historic tugboat "Sandman" in Olympia in 2016, they knew that tallship sailing was the place to be. During their time as a student of Marine Biology at the Evergreen State college they got opportunities to travel to central America and the South Pacific studying coral reef ecology, where they discovered there really is no place in the world like the PNW. After years of adventure Evyn is excited to finally come home to the Adventuress as the Program coordinator for the spring 2022 season!

Maris Winters – Galley Coordinator
A native of Washington State, Maris grew up near Snohomish. She is passionate about food; the chemistry magic that occurs with the intersection of heat and salt, fat and acid, as well as where and how food is grown, and getting other people stoked about how all those things come together. When not on the ship she can be found playing in her metalworking/jewelry studio, with her hands in the dirt, or at work at her loom on a new weaving.

Angi Lungu – Engineer
Angi is originally from Bucharest, Romania and first sailed to Port Townsend from Alaska in October of 2018 on her 31 ft ketch. She attended the Northwest School of Wooden Boat Building in 2020. She enjoys learning and sharing knowledge about technical systems, playing music with people in the presence of fires and riding bicycles into the sunset. Angi is also rather fond of sailing.

Ansleigh Coplin – Educator/ Deckhand
Ansleigh is originally from Winston Salem, North Carolina and moved to the Pacific Northwest about 5 years ago. The last couple of years she has been learning to sail on the Salish Sea, whale and bird watching, volunteering in marine mammal husbandry, and continuing her education with a focus on marine biology. She’s excited to be able to fully nerd out on Washington’s amazing ecosystem and live/ work aboard a beautiful historic ship this season.

David LeMay – Educator/ Deckhand
David grew up playing and learning in the waters and forests of the Salish Sea. A graduate of Western Washington University’s College of the Environment, David has been a camp counselor, a mobile Environmental Educator, teaching and leading workshops and trainings for adults and children of all ages and backgrounds across the country while working, living, and camping on the road, and has worked and volunteered on over a dozen organic farms around the US and beyond.

Emma Gregory – Educator/ Deckhand
Emma grew up in Newnan, Georgia, but has most recently lived in Florida and Indiana before returning to Washington State. They graduated from Eckerd College with a degree in biological illustration and have worked as a medical illustrator and an aquatics specialist, and had recently served as the winter deckhand aboard the Adventuress. They like reading, beachcombing, and fishkeeping.

Emrys Takahashi – Educator/ Deckhand
Emrys Eiko (they/them) was born and raised in Seattle. In past lives, they've been a poet, NAACP youth councilmember, and radio DJ. When they're not on the Adventuress, you can find them playing Resident Evil 4 with friends!

George Clark – Educator/ Deckhand
George has spent his life living around and on the waters of the Salish Sea. Whether kayaking, rowing, or sailing the life of the denizens of Puget Sound has always fascinated him and he hopes to share that fascination with the young sailors who come aboard Adventuress as he has at the Seattle Aquarium and as a tour guide. When not afloat he enjoys building computers and hanging out with as many dogs as can be fit into the day.

Griffin Hoins – Educator/ Deckhand
Griffin grew up on Marrowstone Island in the Puget Sound. He graduated from the University of Washington in 2017 with a B.Sc in Aquatic & Fishery Sciences and minors in Marine Biology, Oceanography, and Art History. He has moved back to the peninsula where he works as a scientific diver and biologist and in the winter, he runs the ski school at Hurricane Ridge in the Olympic National Park. You can also find him playing trombone with Port Townsend’s Unexpected Brass Band.

Janae Zhang – Educator/ Deckhand
Janae is from the San Francisco Bay Area. She recently earned her Bachelor's degrees in Communication and in Cognitive Science from UC San Diego, where she was also an archery instructor. She enjoys working with her hands, spending much of her free time sewing, bookbinding, and collecting more stationery than anyone reasonably needs.