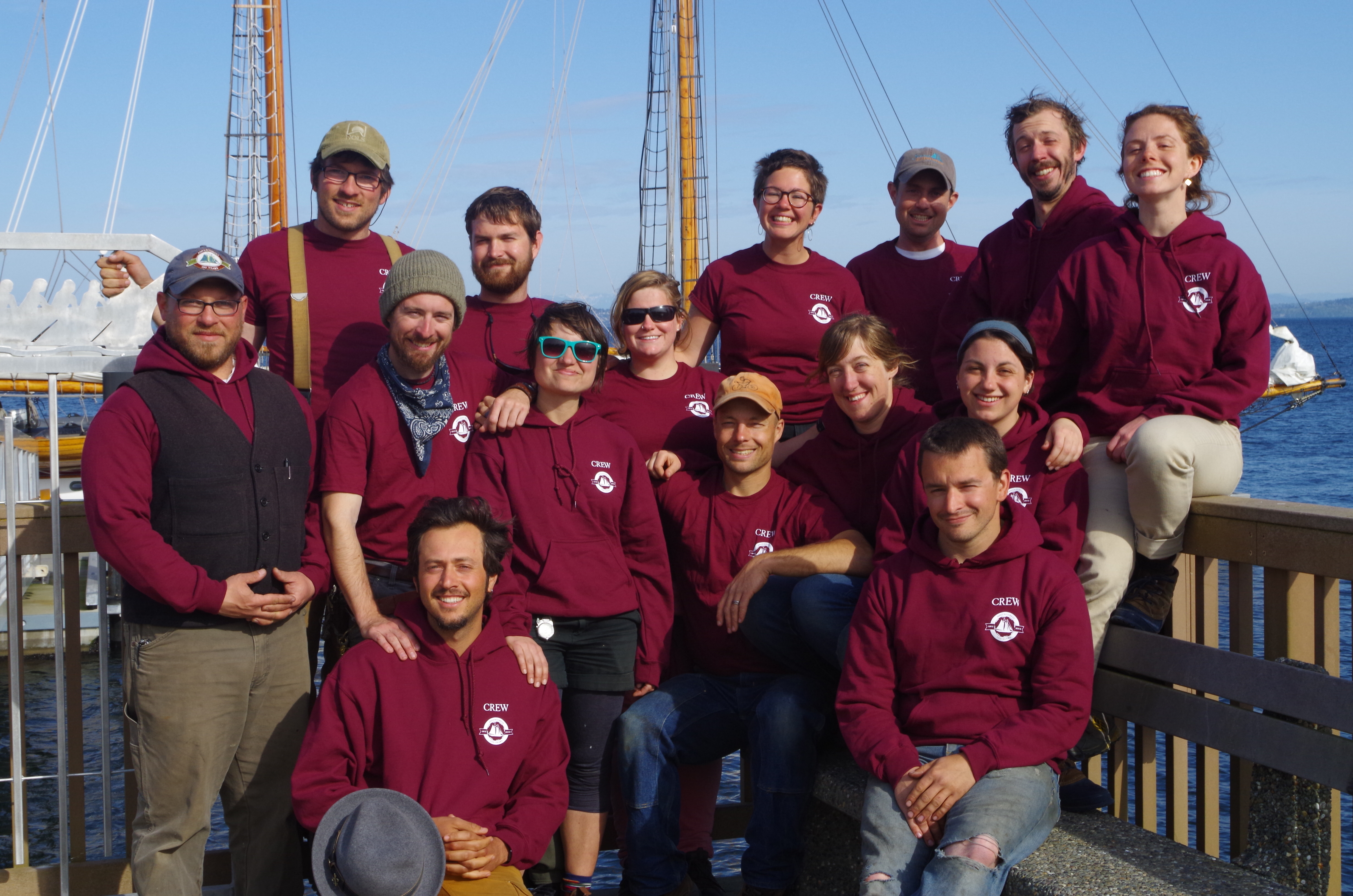 Daniel (Wiley) Armstrong - Chief Mate
Wiley is stepping aboard this season as Chief Mate. He has sailed aboard Adventuress on and off since 2007 as Engineer and 2nd Mate. He has also sailed with several other Tall Ship organizations including LAMI and OCF and spent some time working in the Sound Experience office. When he is not sailing on tall ships, Wiley lives in Davis, CA, with his wife, Zoe, whom he met aboard Adventuress.

Lisa Erdle - Shipboard Educator
Lisa joins the crew after completing her master’s degree in Resource Conservation and Forest Ecology and is looking forward to getting back on the water after sailing on brigantines in the Great Lakes. She has traveled and worked abroad extensively, including teaching outdoor education in Thailand and forestry in Finland, France, Austria, and Switzerland.

Chris Fanshier - Shipboard Educator
With a degree in Geology, Chris spent several years working as an environmental consultant in the mining industry. He recently decided that he wants to spend his time educating youth about science and the natural world. He also spent six months sailing from Fiji to Thailand, stopping in many ports in the South Pacific along the way. He’s excited to share music and stories from his experiences during his time aboard Adventuress!

Katie Giuliano - Engineer / Bosun / 2nd Mate
Katie returns for her fourth year aboard Adventuress, this time as 2nd Mate/Bosun. She spent the winter season as our engineer, installing lots of new equipment aboard. Originally from Rhode Island, Katie has worked on tall ships both on the East and West Coast and is a jack of all trades with her skills in engineering, sailing, teaching, and now as 2nd Mate and Bosun.

Daniel (Dan Dan) Schoen - Program Coordinator
After taking a year off of Adventuress, Dan Dan is coming back for his third season aboard, his second as Program Coordinator. Since we’ve seen him last, Dan Dan has traveled extensively throughout South America and has worked with The Mosaic Project in Berkeley, CA. He brings a love of music, laughter, and compassion with him everywhere he goes.

Nate Seward - Engineer / Bosun / 2nd Mate
Nate has sailed aboard Adventuress every year since 2009, the past two as 2nd Mate / Bosun. This year he’s expanding his shipboard skills by stepping into the Engineer role. He has had experience with other sailing programs including Highlander Seas, Clearwater, and Carlyn as an educator, deckhand, and rigger. A native of Port Townsend, WA, Nate continues to bring his background in rigging and sailing and his affinity for fun pranks to the schooner Adventuress.

Aimee Shafner - Shipboard Educator
Aimee joins the Adventuress crew for the second time for the months of April and May. She most recently spent time sailing aboard Sultana, and has also worked as an instructor with Outward Bound for the past several years. With experience leading team building, environmental expeditions, and sailing programs through Outward Bound, Aimee also has experience with sustainability education, trail crew, and more.

Caleb Stripes - Shipboard Educator
After spending a month aboardAdventuress in 2013, Caleb is coming back for a full season as a Shipboard Educator in 2014! With a wealth of experience in Environmental Education, Caleb is coming aboard after spending the winter on Lady Washington. He has also spent time sailing aboard Sultana in addition to facilitating groups at several land-based environmental education programs.

Amanda Theiroff - Galley Coordinator
Amanda brings a passion for food back to Adventuress for her second season as Galley Coordinator. She has also been aboard as a winter maintenance volunteer for two winters. Originally from New York, Amanda came to Adventuress after sailing aboard Clearwater for a couple of seasons. She is excited to share her delicious meals with you this year!

Paul Thelen - Shipboard Educator
Paul joins the crew for the month of April. He came aboard last October as a month-long intern and is excited to return for another month this spring! When not on Adventuress, Paul has been working at plant nursery in Whatcom County.

Jesse Wiegel - Shipboard Educator / Relief Engineer
Returning for his fourth year as a Shipboard Educator, Jesse utilizes his background in theater and environmental education to deliver engaging and exciting programs aboard Adventuress. He has spent time aboard several other boats including the Pride of Baltimore this past year, and is developing the skills to jump into any relief role that is needed.

Gaia Wilson - Shipboard Educator / Relief Galley
Stepping aboard for the first time as a Shipboard Educator, Gaia grew up on San Juan Island watching Adventuress sail in her backyard throughout the summer. She graduated from Fairhaven College with a degree in Human Ecology and Sustainable Food Systems and has also worked with the Soundwatch Boater Education Program and the Whale Museum in the San Juan Islands. Her experiences and enthusiasm make her a perfect match for the Sound Experience community!

Thomas Young - Shipboard Educator
Thom comes aboard as a Shipboard Educator for his first time, after spending several years sailing with Sea Education Association and doing quite a bit of scientific research in marine environments around the world with a master’s degree in Ecology, Evolution, and Marine Biology. When he isn’t sailing, Thom lives on a small urban subsistence farm that he started in Oregon.